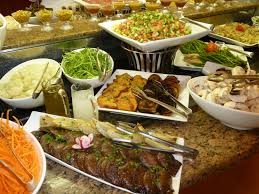 Given the geography, these nation-states have influenced each other over time and the cooking evolved into sharing common principles. Mediterranean cuisine is characterized by its flexibility, its range of ingredients and its many regional variations. The terrain has tended to favour the raising of goats and sheep.

Fish dishes are also common, although today much of the fish is imported since the fisheries of the Mediterranean Sea are weak.[citation needed] Seafood is still prominent in many of the
standard recipes.

Olive oil, produced from the olive trees prominent throughout Portugal, Greece, Croatia, Turkey, Italy, Spain and other Mediterranean nations, adds to the distinctive taste of the food.

Garlic is also used throughout Mediterranean cuisine. It is widely believed that ingredients in this kind of cooking, especially olive oil, are particularly healthy; see Mediterranean diet.

Barbecue or grilled meats, pita bread, hummus, and falafel are very popular forms of the eastern type of the cuisine.